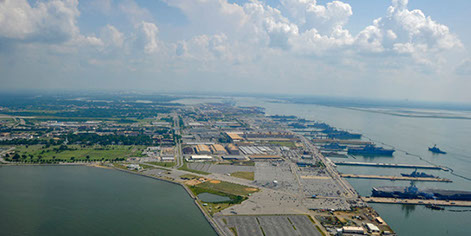 Naval Station Norfolk is geographically located in the Southeastern corner of the Commonwealth of Virginia.

The area is collectively known as “Hampton Roads” and is commonly referred to as such by the residents of the area. Hampton Roads generally includes the Cities of Newport News, Hampton, Norfolk, Portsmouth, Virginia Beach, Chesapeake, and Suffolk, and is populated by over 1 million people.

Naval Station Norfolk is situated in the Sewells Point area of the City of Norfolk, near the site of the battle of the Monitor and Merrimac (CSS Virginia), and is the largest naval complex in the world

*** General Contractors: TURNSTILES.us is a GSA Schedule Supplier with HUBZone Certification. Let us help you with your Federal Government project! Dismiss