Renting a turnstile can be useful in numerous ways when you’re making a movie, TV series, or have any other scheduled event that lasts for weeks or months. Frequently there are a large number of people involved in media production and managing everyone’s attendance effectively is a full-time job in itself. Turnstiles allow one person to pass through at a time when they have valid credentials. The gates stay locked if somebody does not have proper authorization. Perfect for controlling a closed set.

Not only can turnstiles be used for crew management – they make great props! They normally function in prestige environments, bringing high-tech style to the lobbies of prestige locations. If your film features a scene in a hotel, corporate office, airport, or secret luxury lair of a futuristic superhero – put the turnstiles on set! We have had celebrities including Paul Giamatti and Halle Berry walk through our turnstiles on television! 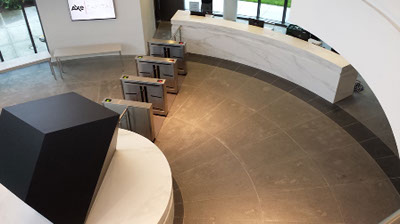 Above: Our Optical Swing Gates on the set of
Billions, Showtime TV Series

Our Turnstiles have appeared on…

We Have a Ghost, Netflix Original Series

The Last Of Us, TV Series (coming soon)

Enquire with TURNSTILES.us about turnstiles for rent. Renting a turnstile can be a great budget-friendly solution for a short-term or semi-permanent event because you can rent the turnstile, use it for a period of time, and then return it for much less cost than purchasing one and trying to resell it. Rental cost is determined on a per unit, per day basis plus freight and handling.

Let us know what type of unit you are interested in (full-height, tripod, optical, etc.) and a friendly team member will get you a quote!

Operation Video for
We Have A Ghost Netflix Turnstile Rental

Thank you for visiting TURNSTILES.us